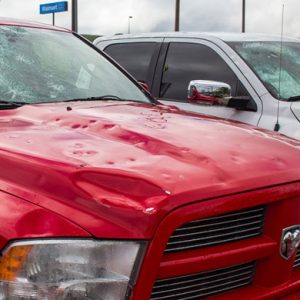 You have discovered your beautiful car or truck has been damaged by a recent hail storm in McKinney. Have you contacted your insurance provider and begun the necessary process to have your repairs covered? If yes, then North Dallas Dent can get your repairs scheduled and handle your claim from this point forward. If not, then no worries either. We can help guide you through the process. Once you have your vehicle brought from your McKinney home or office to our Allen location, North Dallas Dent can begin our thorough process of evaluating and analyzing the damage. Our technicians thoroughly inspect your vehicle’s damage to determine whether or not paintless dent repair is your best option.
Several factors are considered when determining the option to use paintless dent repair or not, including the size and depth of the hail dents. Unbeknownst to most vehicle owners, the original factory paint, on the majority of standard vehicles, is flexible, which means minor dents can often be repaired without painting. The process lends itself as an ideal option for hail damage and low impact dent repair.
How does paintless dent repair in McKinney work? Paintless dent repair comprises of cautiously kneading minor dents and dings, on the vehicle, without adding or removing any paint. This technique is often used when dealing with strikes on the outer panel or indentations that have not stripped paint from the vehicle. Additionally, our technicians factor in the location of the damage. Hood or door panel damage, located on the edges is not a good candidate for paintless dent repair. North Dallas Dent can determine the best option for every type of dent.
Paintless dent repair in McKinney is executed by our technicians gaining access the back of the dent. We then use specialized tools specifically designed for dent removal. This technique provides a view of both sides of the dent allowing pressure to be applied accordingly, while manipulating the dent and restoring it back to its previous shape. Some situations require the use of fluorescent light boards to create shadows in the dent aiding in leveling of the affected area. After careful tool use and exact manipulation, including the edges, the size of the dent will minimize and ultimately disappear.
North Dallas Dent uses only the latest technology and specialized tools for paintless dent repair, guaranteeing your vehicle is restored back to its pre-accident or hail storm condition. Whether you have a minor ding or a major dent, bring your vehicle to North Dallas Dent and we’ll make everything right again. Call today and let our team of experts put things back like they were before the McKinney hail storm.

Request a Call back